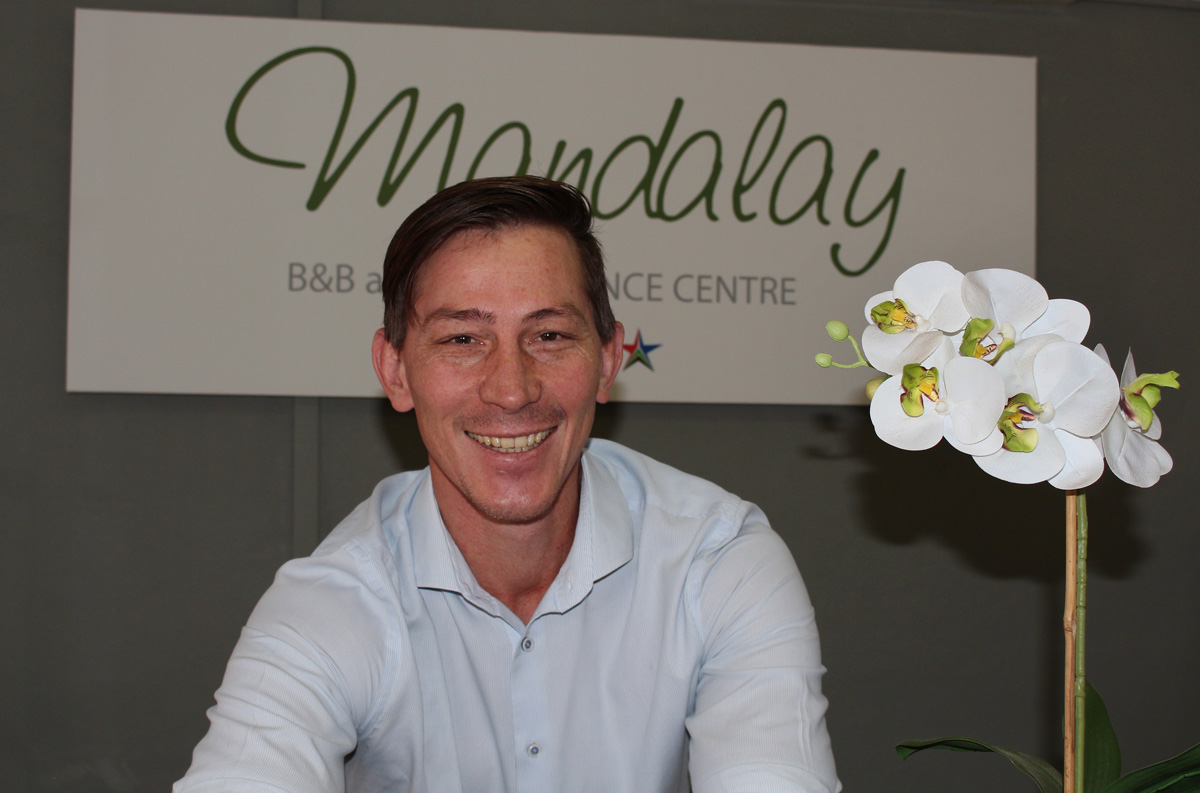 In this, the second installment in an occasional series on B&Bs and guesthouses, we talk to Ettiene Botha, co-owner and manager of Mandalay, in Durban North. Business travellers provide their bread and butter and tourism and leisure a welcome topping, he told Umhlanga Tourism over a cup of coffee in the airy breakfast room.

Despite lockdown, the four-star B&B and conference venue was getting a few guests. And they would be stepping up the pace with a refit now that contractors were more available.

Botha and his partners bought Mandalay from its previous owners, the McDaids, in November 2017. They were determined to build on its success while introducing some changes and improvements.

A guests’ bar in the B&B’s poolside lapa was now complete; a new braai area largely done; the kitchen has been sorted; and an upgrade was in progress to the conference venue.

All the necessary health and safety measures were in place.

“I am a stickler for the rules,” he said.

Botha reckoned that pre-Covid-19 the nine-bedroom establishment had been ticking along nicely. It enjoyed repeat business from satisfied guests, some of whom had left endorsements on TripAdvisor, the influential accommodation portal.

It’s perhaps a kilometre from the Athlone Bridge, on the northern side of the Umgeni River. It is also close to a major sports precinct.

Restaurants and take-aways are plentiful.

Step out of the grounds onto High Ridge Road and you can take in sweeping views to the south. The Moses Mabhida Stadium looms large, with the the city beyond it. A little to the east, a vast bight of beach curves towards the Durban harbour mouth.

It’s a shame you don’t see this once inside the property, which is down a panhandle. But the upside is that Mandalay is quiet, perfect for conferences, said Botha.

Their conference venue, above the pool, can accommodate up to 32 people, or between 16 and 20 under the Covid-19 rules in place at time of publication.

Botha said the venue was popular with corporates and business trainers. He mentioned Chris Kriek, who has run a number of sessions for Molex, the electronics and communication systems company; Arnold Pietersen; and Sunil Sewpersadh of YashTech Consulting.

Mandalay was also geared up for hosting sports teams. It counted the South African Ladies, Botswana Ladies and Swiss Ladies hockey squads among guests in the past few years.

Although he does not have a background in the hospitality industry, Botha said he had taken to the work well.

He has been putting to use management skills acquired running his own accounting business in Johannesburg and in more recent years, a cupboard design and fitting business, in Durban.

Work hard, play hard, they say. And here the 39-year-old ticks another box.

In his youth he won silver at the nationals for freestyle amateur wrestling in the under 84kg weight division. In Durban, in 2015, he discovered a passion for competitive touch rugby.

He plays in three teams locally and represents KwaZulu-Natal and the country too.

Last year, Botha went to the sport’s World Cup in Malaysia, competing in the mixed (men and women) over 30s division.

He was to have worn national colours again at the 2020 European Touch Rugby Championships in England. But Covid-19 put paid to the July-August event.

Touch rugby is, of course, very much a team sport. And Botha reckons it takes a team effort too, to run a successful B&B.

“The way you build people up is a very important part of any business.”

All pitch in to help him in the kitchen and Botha said they have their breakfast-making down pat. (No vegetable oil, only butter and olive oil, he offers by way of a tip). The results are so good, he insists, guests have brought friends and family from other establishments to sample Mandalay’s superior fare.

So much for food, what were the other ingredients for success?

A host must learn to read his guests and understand their needs, said Botha.

Either way, a B&B host must be attentive and sort out any little problem that might arise or meet a particular need.

Companies want to know that the B&B they’ve booked with will look after their staff.

Botha mentioned eventing support companies, including Shattered Glass, who do the sound and light effects at Dolphins cricket matches.

Guests were sometimes in a hurry and he made sure to have dagwoods or sub sandwiches ready so the sound guys could be on their way in good time.

During the Comrades Marathon, the Mandalay team rose with the larks so they could send their runner-guests off with a packed breakfast.

“I am a people pleaser,” said Botha.

The B&B business, as he points out, is competitive.

Happy customers were loyal, but if you let them down they would be at a rival’s next time.

The touch rugby player knows you have to stay on your toes.