Some sanity in a humpty-dumpty world

March 23, 2020 | Umhlanga Tourism | Comments Off on Some sanity in a humpty-dumpty world 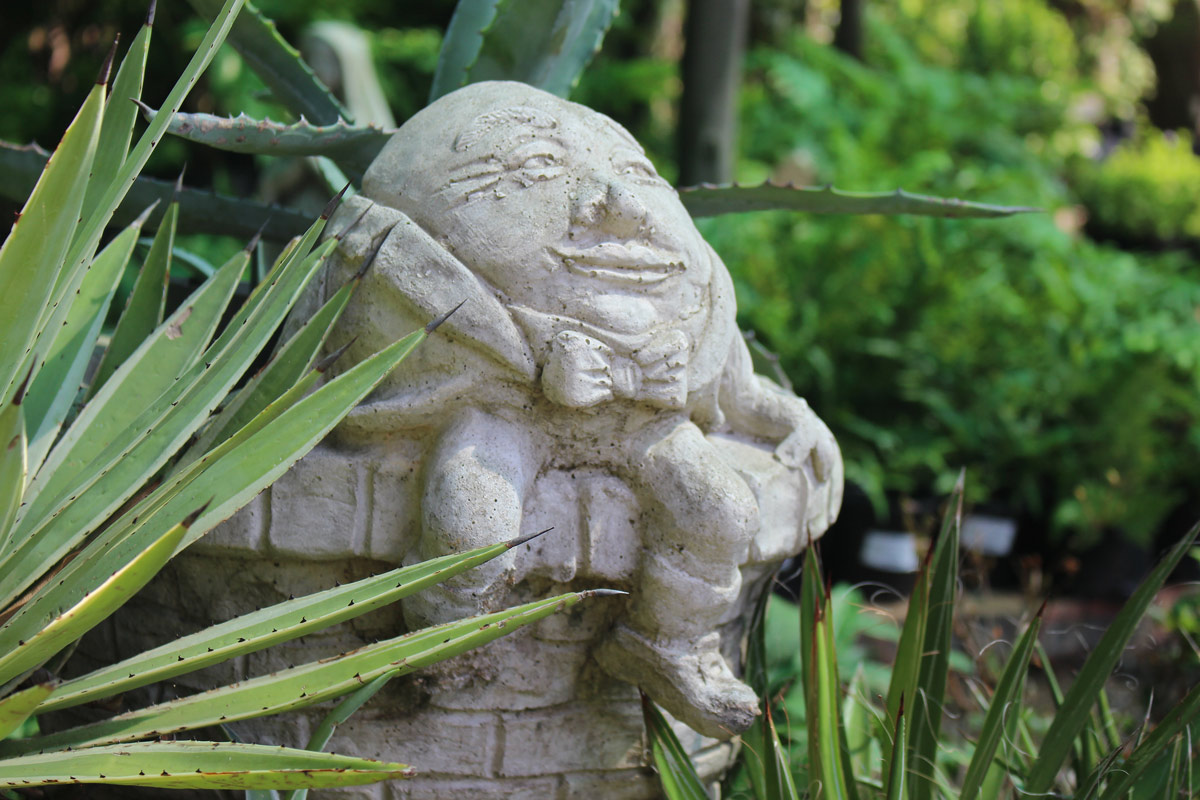 Social distancing – now there’s an oxymoron for our times. But If you happen to be on the FunShine Coast and need to be far from the madding crowd and want a pleasant, airy place for a light meal, then try the Hingham Nursery Tea Garden.

We asked our waitress Sharon Makope, a cheerful young woman with a bright smile and an even brighter pink T-shirt, whether they get many overseas tourists.

Makope, who had been wielding the hand sanitizer bottle when we arrived, thought about it for a while before recalling a couple of Germans. They had been out on a business trip and were introduced to the tea garden by a South African colleague.

Makope had been at the tea garden for only six months, but we gathered it was one of those places little known to tourists, but a bit of a favourite with locals.

It’s easy to see why.

Apart from good food, the setting is a breath of fresh air.

There’s lots of open space under a couple of bomas – all the better to keep the recommended 2-metre minimum distance from your fellow diners.

It’s lush with immediate views of rows of pretty plants waiting to be bought by gardeners.

Somewhere near the perimeter, giant bamboo swayed gently and beyond that, on the back of the ridge that runs parallel to the coast, the homes of Glen Hills and Red Hills studded a sub-tropical blanket of trees and shrubbery.

The nursery is only a few hundred metres away from Umhlanga Rocks Drive, so it would be easy to get to for visitors coming from the Umhlanga Ridge or any of the scores of B&Bs and guest houses that pepper Durban North and La Lucia.

Or you could approach it, as we did from the south, along Chris Hani Road.

Formerly known as North Coast Road, this was the original route out of Durban to the KwaZulu-Natal North Coast.

Today, it’s more of a link road to suburbs and townships to the north.

It passes numerous car breakers and auto spares shops; building supplies merchants and demolishers’ yards; light industry; wholesalers and discount retailers of one description or another.

It’s a commercial strip of the kind guidebooks sometimes refer to, if at all, as “gritty”.

Which is not to devalue the road – an important artery, in the body of a working city.

But if Umhlanga and its high-toned environs was the area’s Long Island, then Chris Hani/North Coast Road would have to be the Valley of Ashes.

All of which made arriving at the nursery and tea garden, a few hundred metres off North Coast Road, like coming upon an oasis after a spell in the desert.

It was nearing lunchtime when we took our seats.

A handful of other guests were at the venue.

Two well-groomed women were having an early lunch at a nearby table – which is to say, unsociably far from our own, making eavesdropping difficult.

A retired couple trickled in a little later.

And a mother with a boy and girl in tow came as we were finishing.

We scanned the menu and took advantage of the Friday two-for-one pancake deal, for the girls.

A round of sparkling apple drinks came sharpish, followed by the food.

The girls made short work of their pancakes.

Hellie nibbled the circumference of hers until what remained, she claimed, was the shape of a map of Australia.

Maybe, but where was Tasmania?

Then, taking a break from the food art, she dashed off to the kitchen for a bottle of syrup to supplement the cinnamon, lemon and sugar.

“Too perfect… very, very nice,” was her verdict as she finished her meal.
Gensie, her younger less loquacious sister, simply raised her thumbs.

The sandwiches were tasty, with the spicing correctly mild.

The chips were good too and the portions generous.

“If one of the symptoms of the virus is losing your appetite, then it hasn’t set in for this dinner,” said my pal Oscar, polishing off his lunch.

Apart from pancakes and toasted sandwiches, the menu covers quite a few bases, including wraps, hamburgers, tramezzini, salads and deserts.

Bobotie, that old South African favourite, was available too. It would likely be a good bet for a visitor wanting to sample a bit of the country’s underrated culinary heritage.

Breakfasts (available all day) included five versions of eggs benedict, among them one with salsa and another, “The Lola”, with curried mince and fresh coriander.

Well, this is Durban.

The tea garden is not licensed (BYO welcome), but there’s a selection of juices, teas and coffee. New on the menu was the Frothy ‘Dalgona’ Iced Coffee.

Your correspondent later learnt that this was all the rage on Instagram.

It had gone viral, as they say, and was apparently invented in Korea before spreading across the globe like you know what.

Anyway, there’s plenty to choose from at the tea garden and prices seemed reasonable.

While you are eating or totting up the bill (ours came to R296 plus a tip) you can do a bit of people watching.

Couples could be seen from the dining area walking up and down, picking out flowering plants or browsing among the veggie seedlings, perhaps with hunkering down and living off the land on their minds.

A hibiscus festival was on the go, until the end of March.

The nursery’s owner, Julie Scragg, later confirmed that hibiscuses, usually R63.95, had been marked down to R55.

Incidentally, the nursery was established in 1975 on land that had been owned by Scragg’s family for generations.

Her great, great Uncle, Henry Pratt Harrison (he is remembered in the name of a nearby road) grew coffee and later sugar in the area and the origin of the nursery makes for a fascinating slice of local history.

Animal watching was the other big spectator sport at Hingham.

Vervet monkeys scuttled above us on the shade-cloth draped boma roof while we ate.

(You could request water spray bottles from tea garden staff to shoo them off if they became too pesky).

The children were getting fidgety by this stage. So while the adults were finishing their food, they hurried off to explore.

They came back a little later, excited to tell us about a play area that they had found, with a jungle gym and what they called a “secret garden”. This was a shaded area under a vine-wrapped steel pergola, plus a bench dedicated to the memory of a loved one.

But the monkeys, including a big male with the lurid blue scrotum of the species and seemingly no fear for children and womenfolk, arrived, spooking them.

Apart from the vervets, the tea garden used to be famous for its mobs of mongooses.

After lunch we did a quick tour of the nursery, especially the indigenous plants and succulent areas.

Along the way we met Glynnis Scallan, a lifelong resident of Durban North and a regular visitor.

She said the mongooses had disappeared and recalled how she used to enjoy watching them break eggs given to them by Loura “Lola” Venter, who manages the tea garden for the owner, her daughter, Danielle Venter.

Zen and the art of mongoose despair

One of the guests, who your correspondent happened to know from the world of NGOs and a hike down the coast, said the mongooses may have disappeared after a resident of a gated estate in the neighbourhood put out poison.

Our informant, who stressed that these details had not been confirmed, said the alleged poisoner had taken umbrage at the mongooses disturbing the peace in his Zen garden.

Venter Jnr, who we later spoke to by phone and WhatsApp, said two troops of mongooses used to visit and had been a favourite with guests.

“They were a big attraction. They became very tame and would sniff around looking for food,” she said.

But they disappeared around March 2019, she said.

Venter Jnr, who took over the tea garden 11 years ago, said the cause of this was unclear.

But she noted it was around the time of a monkey poisoning incident in Umdloti, a 20 minute drive up the coast.

Another theory, suggested to her by animal behaviour experts, was that inbreeding had led to the mongooses’s demise.

It was a natural process, so the thinking went, and in time new troops, fresh blood as it were, would arrive.

“We are hoping that is the truth and not the poisoning,” she said.

“My mom was like the mongoose whisperer, the pied piper. She would call and they would come out of the bushes. We used to give them dog pellets and eggs and a bit of bread,” said Venter Jnr.

We met the mongoose whisperer at the kitchen serving hatch before we left and the friendly tannie confirmed that animals were a big part of the tea garden experience.

The tea garden, as we had gathered by then, was also big on keeping guests safe.

“Ons is baie soet met hierdie goed,” said Venter Snr, gesturing to a spray bottle of sanitizer on the counter. “Dis oop,” she said of all the airy space in the dining area.

A sociable place, it’s fair to say, but plenty of distance too.

The restaurant is preparing to offer free home deliveries. See its Facebook page.

For more dining options on the FunShine Coast click here.