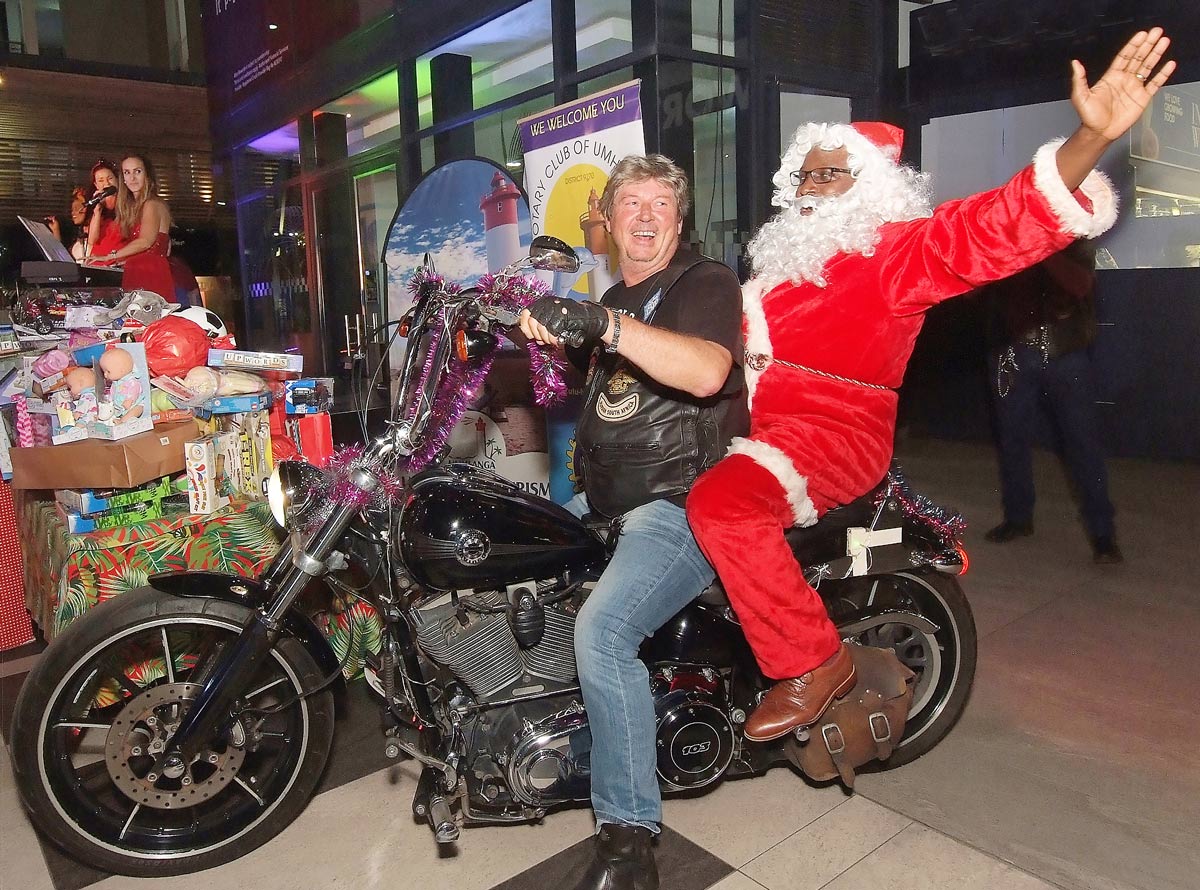 Carols under the Stars, Umhlanga’s annual Christmas concert, more than lived up to its billing with stellar performances from the entertainers on Thursday. And the crowd, including visitors from Columbia, the US and the UK, packed the courtyard at Granada Square, joining in heartily to sing the much-loved yuletide tunes.

It proved to be very much a family affair. Scores of children came early to soak up the excitement, while others busied themselves making Christmas craft at a table set up for the purpose near the stage.

Also near the stage was a table where carolers could drop off toys for donating to needy children.

By the end of the evening it positively groaned with a huge pile of presents.

Rotary Club of Umhlanga will be distributing the gifts to orphans and waifs at six children’s homes.

The club’s acting president, Kevin Finegan told carolers that their Toys for Joy campaign had been going for nearly 50 years.

He said the smiles on the faces of children when they received the gifts were something to see.

Finegan appealed to those unable to bring a present to the carols concert to drop off one at the Umhlanga Tourism association’s Chartwell Drive office, for collection by Rotary.

He also thanked Rotary, staff and the many volunteers who made the event possible.

Then it was back to the entertainers, led by MC and vocalist Marion Loudon.

Loudon teamed up with pianist and singer Tory du Plessis for a charming duet of Have Yourself a Merry Little Christmas.

Kirsty van der Linde added sax appeal to the evening with a bold as brass take on Santa Baby, shrugging off a pesky mic problem.

Beatboxer Mikey Mathaba proved a hit too, dazzling the audience with his acapella talents.

He arrived on the pillion of a Harley-Davidson motorcycle, piloted by Andre Roodt.

Earlier, Roodt and clubmates from the Durban Free Chapter of the Harley Owners Group rumbled down Chartwell Drive and parked outside the square to await their cue.

If anything the bikes looked even better than they sounded.

Roodt quipped that the reindeer had taken the day off and the club had pitched in to fill the gap.

If so, the man in red ought to have a word with Dasher, Dancer, Donder, Blixem, et al because it was the fifth year that Roodt was doing duty.

Not that Santa seemed to mind.

There was much ho-ho-hoing (with a distinctly American accent, it must be noted) and good natured-banter with onlookers.

Then, as the singing drew to a close, Santa and Roodt weaved the big bike down to the stage, with a few lusty blips on the throttle in lieu of sleigh bells.

Children soon surrounded Santa, crowding in to get a cuddle or to pose for a snapshot.

Later, as the carolers began trickling away into the night, St Nick could be seen mopping his brow under the weight of his suit and the sultry Durban air, but never flagging with the Christmas cheer.

Your correspondent has it on good authority that any resemblance between Mr K Kringle, of No. 1 North Pole, and Michael Jordan, the Durban-based senior USAid official, Rotarian and husband to US consul general Sherry Sykes, is purely coincidental.

The carols concert was one of the highlights of the Umhlanga Summer Festival which runs until 23 December.

The next festival date to put in your diary is the Miss and Mr Umhlanga Pageant, which takes place at the Millennium stage, at Main Beach from noon on Saturday, 21 December.