December 2, 2019 | Umhlanga Tourism | Comments Off on Model makeover for Umhlanga 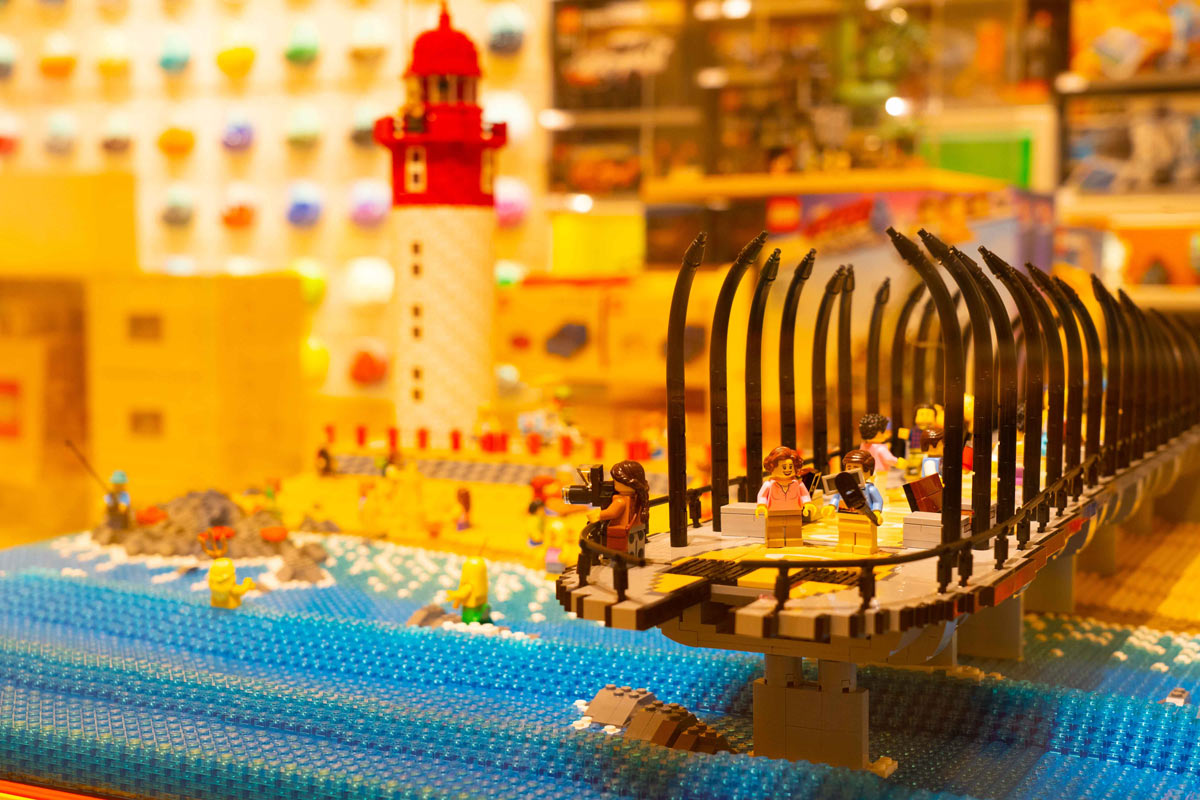 A dazzling new diorama of your favourite seaside resort is now on show. It’s a treat for the young and young-at-heart.

There’s the landmark lighthouse and the famous whale-bone pier. And nearby, people are having fun: building sand castles, fishing from the rocks or enjoying the promenade.

It’s a slice of the Umhlanga Rocks you know and love, only littler, positively Lilliputian.

In short, we are referring to a charmingly detailed slice of your favourite seaside resort, made from 14 500 brightly-coloured, interlocking miniature bricks.

Store co-owner Robert Greenstein said the model was built to give the 200 square-metre emporium an authentic local flavour.

It complements a 57 000 brick mosaic of a Durban rickshaw, also in-store, especially made by the LEGO parent company in Denmark.

“Retailing can be a bit boring at the best of times. We want to make the shop interesting,” Greenstein told Umhlanga Tourism.

With this in mind he approached a “good customer” and one of the country’s more talented Lego modellers for help.

Greenstein said he and Paul – who prefers to keep out of the limelight and who we refer to here by his first name only – met over coffee and did some brainstorming.

Paul, a member of the ZA Lego Users Group, then set to work, clocking up nearly 40 hours on the design and a further 150 hours building the model.

It proved to be time well spent.

The familiar lighthouse towers over the model at one corner, while the award-winning pier extends into the sea from another.

Together they give the work a pleasing sense of height and depth and leave viewers in no doubt about what they are looking at.

But what keeps young and old peering into the glass case that encloses the model is the attention to detail and many lifelike and whimsical touches.

Paul has gone to pains to capture the look of the 80 metre-long pier. He borrowed bits and bobs from a variety of Lego set to recreate the whale ribs, wide walkway and the viewing cutout at the end of the deck.

Like the 2007 original, which won the SA National Award for Outstanding Civil Engineering Achievements and was named the most beautiful pier in the world by media company CNN in 2014, the model includes public seating.

A little Lego character sits on one of its benches, enjoying the view south-west, towards Durban.

A man at the end of the pier appears to be photographing a standup paddle boarder or perhaps a dolphins at play.

This being a model of a contemporary scene, there’s even someone putting himself in the picture with a tiny selfie stick.

Also on the pier, which in real-life has been undergoing repairs, is a young family, returning to the promenade, with dad bearing baby in a carrier on his chest.

There are kids buying ice creams and a man with a wheelbarrow (and a dog). Presumably he is an employee of the uMhlanga Urban Improvement Precinct, busy keeping things tidy.

On the beach itself, the fun continues.

Children can be seen building an impressive sandcastle.

And a picnicking couple have brought along everything you might need for a day at the seaside, including wine, goblets, what might be a giant melktert, a boom box and even a guitar.

Your correspondent especially enjoyed the model lighthouse, which is a faithful recreation of the original 1954 structure.

But in real life, the red-and-white, 21-metres high tower has an automatic light and no lighthouse keeper. So how do we account for the moustachioed gent that Paul has put at the rails near the top?

We know the lighthouse is closed to the public, but the chap with the whiskers may have somehow secured Portnet’s permission for a visit.

More likely, the model maker was having fun with his project and took a little artistic licence.

At any rate, it all comes together delightfully well.

The bricks that make the model are produced by the billion by multi-billion kroner Billund-headquartered toy giant, the Lego Group. So you might expect a measure of blandness about the end result, but not so. It’s distinctly Durban.

He said the Gateway store, which opened on 16 November, was the country’s fourth Lego Certified Store.

The other three are at Sandton City in Johannesburg; Menlyn Park in Pretoria; and Canal Walk in Cape Town.

To read more about Gateway Theatre of shopping click here.