In honour of Women’s Month… 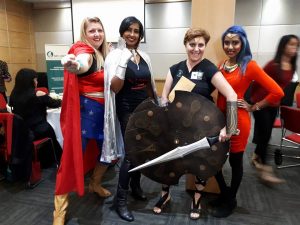 Who said Superwoman was a fictional comic character only? There is proof that she exists in real life. In various forms. Take these ladies as a modern-day, local example. Lynn Eaton, Shivanie Naidoo, Trish Roberts-Loose, Claudette Lingenfelder and Brenda Daniels – all aka Superwomen – congregated, together with other amazing women, at the Umhlanga Women Achievers Businesswomen’s Networking Meeting at Gateway Hotel, Umhlanga, on Wednesday 16 August. (Who said business had to be boring?).

The meeting’s guest speaker was Cindy Norcott who is the founder of employment agency Pro-Appointments and the charity The Robinhood Foundation. Prior to her talk ladies discussed around their tables how many balls they juggled in life. Balls ranged from various companies, to numerous projects, to small children versus teens versus wild ageing parents, to terrible traffic and diaries crammed full of engagements. Cindy reminded ladies that whilst it was okay to have various things on the go at one time it was good to say ‘no’ sometimes. And important not to try to be a perfectionist. Cindy was at pains to point out how very far from perfection she herself was, and ended her amusing talk with this insightful quote by Lily Tomlin: If I had known what 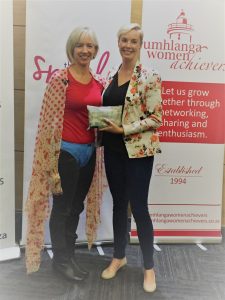